Finally Samsung has officially launched the 9th Note of the Galaxy series.

Samsung has officially unveiled the Galaxy Note 9 following months of leaks of rumors, many of which were on the money.

The new device sits alongside the Galaxy S9 and Galaxy S9+ in the company’s smartphone range, differentiating itself with the new and improved Bluetooth-enabled S Pen.

Here are the specifications and Features of The Samsung Galaxy Note 9 2018 India: 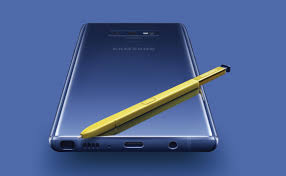 –  The display comes with Super AMOLED capacitive touchscreen, 16M colors with a screen size of 6.4 inches and a 1440 x 2960 pixels, 18.5:9 ratio (~516 ppi density) Resolution and a Protection of Corning Gorilla Glass 5 with a addition of always-on display. Coming to sound, it has a 3.5mm headphone jack and Active noise cancellation with dedicated mic and have stereo speakers.

What about the new S Pen?

With the Galaxy S9+ being essentially the same phone as the Note 9, it’s in the S Pen that the difference needed to lie between these devices.

The new S Pen is now Bluetooth-enabled, allowing the button to be used for other jobs, such as music playback, launching the camera or controlling long-range self-timer.

Here’s some of what you can do with the new S Pen:

Here’s the unboxing video for The Samsung Galaxy Note 9 :